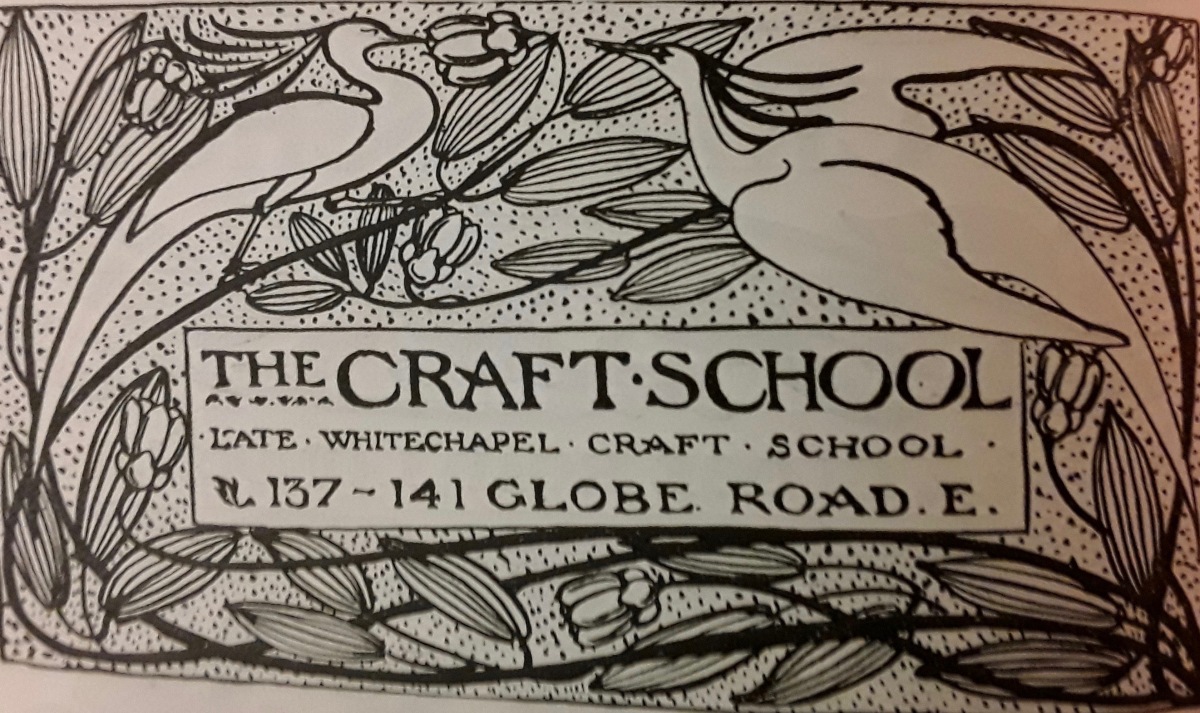 The 49 Beaumont Square community set up the Whitechapel Craft School in 1891 in premises at 27 Little Alie Street. Its function was to “provide for the wants of men and boys engaged in the building, furnishing and kindred trades” (Annual Report 1897). Initially it was supported by subscriptions from private individuals and few City companies, then for two years it was assisted by the Trustees of the City Parochial Charities. In 1894 it was awarded a grant by the Technical Education Board of London County Council. In 1896 it was moved to premises at 137-141 Globe Road (a disused Catholic Church), and the LCC grant was considerably increased. The school had no income from fees.

Hubert Llewellyn Smith chaired the school board, supported by Hugh Fairfax-Cholmeley, A.P. Laurie and A.G.L. Rogers, his Beaumont Square friends and other co-opted board member. They were joined by W.R. Lethaby, the architect who chaired the Arts & Crafts Guild in its early years. Hubert directed the school throughout its life. Donors and subscribers throughout the life of the school included other noted names from the Arts and Crafts movement and other social reformers and activists, including E.W Gimson, the furniture maker, the Marquis of Ripon, a reforming Liberal Statesman, and Charles Booth whose poverty maps did so much to inform the social reform movement.

The school sought to teach arts and crafts in a way which encouraged original, conceptual design in the making of objects for practical purposes. It was a deliberate experiment in educational methods as applied to craftsmen. It taught the same subjects as other technical schools, but normal teaching methods, which were organised around the copying of designs, were disregarded. The usual features of drawing were taught, freehand drawing and analysis and combination of elliptic and other curved forms. But, however, it was taken further with careful study of natural forms, plant life and growth, with no copying of designs, each piece of pupils work had to be original with their choice of materials.

This was not a school for architects or architectural assistants, but for journeymen, apprentices and learners. With regard to the chemistry of mixing paints, Hubert was emphatic that they were training house painters, not colour mixers. He felt the location of the school, in one of the poorest parts of the East End, helped to guard against it drifting into dilettantism.

From the beginning Hubert insisted on keeping close connections with employers and others employed in the trades, in order that the artefacts designed would prove useful in industry; ‘Beauty’ and ‘Utility’ were the two watch words of the school. In 1897 the school employed teachers for carpentry and joinery, wood carving, drawing, decoration and clay modelling, plumbing and ornamental lead work, cabinet making, building construction and painting with oils, colours and varnishes.

In 1898, a new development was the opening of a Housekeeping School for girls, teaching cooking, housewifery, dressmaking and so on and Clara Collet, the social reformer, was invited to join the board. Student numbers in 1898 had risen from 158 in the previous year to 203, with 258 entries in the classes. There were also 33 boys from the Parmenters’ Foundation who attended for manual instruction. There were also eight students who held ‘exhibitions’ from the Technical Education Board.

The Craft School soon became more than just a school, it also operated as a social club. By 1898 there was a library, cricket for both boys and girls and Christmas parties for the students and their siblings. There was also a ‘smoking concert’ for students and friends and a student production of a play, which at Easter 1900 was a selection of scenes from a Midsummer Nights’ Dream. There were performances every night for a week; tickets were free and were printed in the school.

In 1902 physical training was introduced on Wednesdays for boys and girls. A system of rewards for good attendance was implemented and the Board started to look for larger premises for the school. Saturday Evening lectures were also started in the main Workshop.

In 1904 and employment bureau was started. The school was invited to submit exhibits for the British section of the St Louis International Exhibition. They submitted seven cases of work. Some examples of pupils work is shown below. 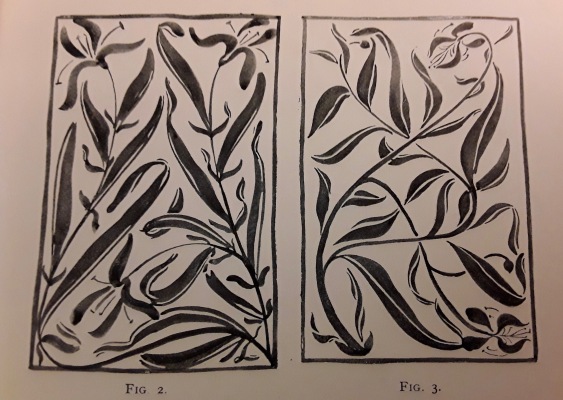 The School was closely associated with the Art Workers Guild in Queens Square and the Central School of Arts & Crafts, some of its students becoming members of one or other of these and members of the two institutions advising or teaching at The Craft School.

In 1907 the school moved to 37-39 Stepney Green Road, to an elegant Georgian house, where it continued to thrive, facilities then also including a gymnasium.

The House at 37 Stepney Green Road (now a private house) and view of the staircase with students work hanging on the wall. (interior courtesy of London Metropolitan Archives).

Family, friends and neighbours were often included in activities at or generated by the Craft School and it was remembered with great affection. In 1915 it was forced to close due to financial and other pressures which were direct consequences of the Great War. After the War for various reasons it was not found possible to reopen the school.

However, in 1925 a Memorial Garden was created, under the guidance of Hubert Llewellyn Smith.  Many supporters, ex-students and teachers contributed to the creation of the garden, bearing testimony to the esteem with which the school had been held.  The garden,  now overshadowed by trees and missing a number of the features specially created for it, still exists as an open space for the public in Globe Road, today.  The wrought iron railings and gate designed by Mr. F W Troup, an arts advisor and later a a governor of the school remain. These railings incorporate a ‘rose and ring’ design, in memory of the original boys club run at 49 Beaumont Square in which the school had its origins. The Rose and the Ring was a satirical work of fiction (he called it a fireside pantomime) by William Makepeace Thackeray, which poked fun at artificial class values and promoted true feeling.

The plaque over the gate of the Blind Beggar of Bethnal Green, designed by Miss Winifred Turner of the Central School of Arts and Crafts, and the reverse plaque with its inscription to the school, was designed and made by Miss Lucy Samson of the same School. The plaque was actually cast under the direction of Mr. W. A Steward, a former student of the school. The flower bowl, which still remains on the central tomb, is the work of Mrs. G. F. Watts”s Porters’ Guild at Compton.

Now missing are a copper vane, in the form of an old sailing ship, which topped a flagstaff, and which was intended to suggest the East India Company’s ship the “Globe”, and two oak benches. The latter were designed also by Mr. Troupe, whilst the sailing ship was the work of Mr. O Burridge and Mr. F Adam, both also of the Central School of Arts and Crafts. An original drawing for the Blind Beggar plaque by P.R. Jerrard illustrates the quality of workmanship associated with the school. 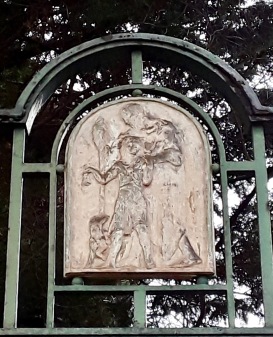 The Bethnal Green Blind Beggar over the gateway. 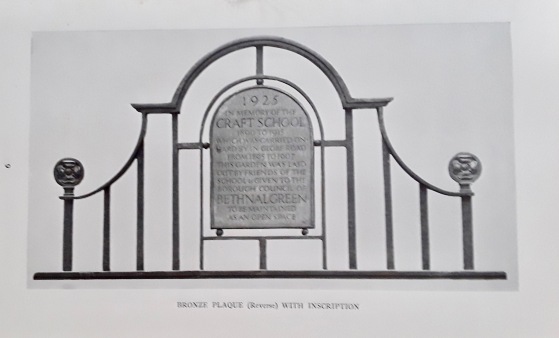 Reverse of plaque over gateway.

The Plaque over the Memorial Garden gate.

A pdf photographed copy of the leaflet created for the opening of the Memorial Garden in 1925 can be accessed below. (coutesy of the Bishopsgate Institute).